Once Size Doesn't Fit All

When you're stepping outside the well-trodden path and trying to create something new, you often have to find inspiration outside of the discipline itself. I tend to read books on local economics, environmentalism, and small business practices seeking analogous situations that might help to define this new pathway.

To that end, I am in the midst of reading Cradle to Cradle: Remaking the Way We Make Things, by William McDonough and Michael Braungart (highly 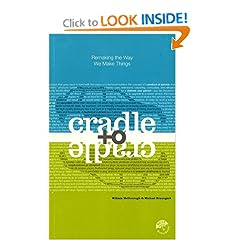 recommended). The chapter "A Question of Design" has a segment entitled "One Size Fits All," in which the authors discuss the Industrial Revolution's underlying design assumption that "universal design solutions" (i.e., one size fits all) could be implemented to improve the world. They use the examples of International Style architecture and mass-produced detergent to illustrate the flaw in this orientation. I think it is worth quoting at length in order to fully understand that what has happened to the arts is not an isolated and unique historical development that was "organic" and "natural," but rather part of a larger social movement resulting of a particular way of relating to the world.

Their goals were social as well as aesthetic. They wanted to globally replace unsanitary and inequitable housing -- fancy, ornate palaces for the rich; ugly, unhealthy places for the poor -- with clean, minimalist, affordable buildings

unencumbered by distinctions of wealth or class. Large sheets of glass, steel, and concrete and cheap transportation powered by fossil fuels, gave engineers and architects the tools for realizing this style anywhere in the world.

However, the vision of the originators was debased by those who followed: 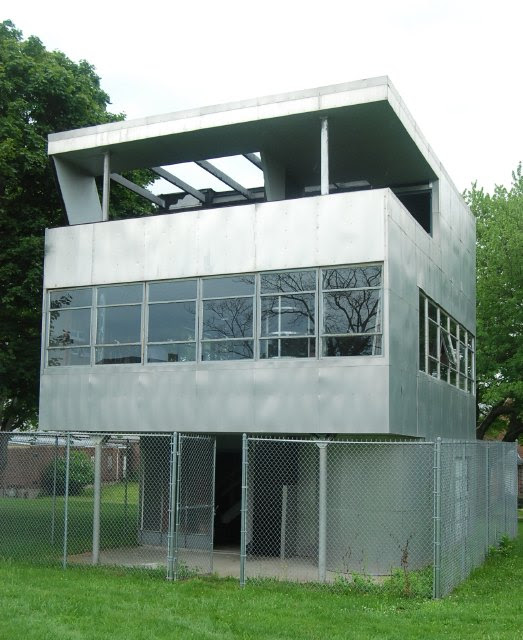 Today the International Style has evolved into something less ambitious: a bland, uniform structure isolated from the particulars of place -- from local culture, nature, energy, and material flows. Such buildings reflect little if any of a region's distinctness or style."...Buildings can look and work the same anywhere, in Reykjavik or Rangoon. (italics mine)

The photo is of the Aluminaire House, and it is, without a doubt, one of the ugliest things I've ever seen.

Shifting to detergent, the authors write:

Major soap manufacturers design one detergent for all parts of the United States or Europe, even though water qualities and community needs differ. For example, customers in places with soft water, like the Northwest, need only small amounts of detergent. Those where the water is hard, like the Southwest, need more. But detergents are designed so they will alther up, remove dirt, and kill germs efficiently the same way anywhere in the world -- in hard, soft, urban, or spring water, in water that flows into fish-filled streams and water channeled to sewage treatment plants."

In the interest of appealing to as large a market as possible, detergent is disconnected from its relationship to local conditions.

The arts have fallen prey to exactly the same one-size-fits-all approach, not only in mass-produced art such as television, popular music, and movies, but also in art forms that have an intrinsic local orientation, such as theatre and visual art. Plays, for instance, are designed to appeal to NYC audiences and critics. If they achieve a successful NYC run, then across the US regional theatres will produce their own versions during the next couple years, and twenty years later community theatres will do their own reproduction. But is it really true that the stories and styles that appeal to a New York audience will automatically be right for one in Asheville, NC or Lincoln, NE?

Let's think of this by analogy. Here are two pictures of places in the world: 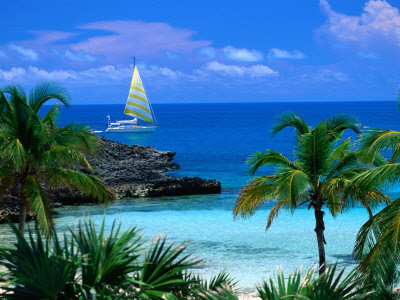 And yet when it comes to plays, we see plays such as Rent being performed in Peoria and witnessed by the ultimate New Yorker, Rocco Landesman, who will judge it according to New York values. We universalize those values, and disseminate New York stories as if, like the International Style architecture and mass-produced detergent, they are completely isolated from place, from local culure, traditions, history, and values. People in New Amery WI watch CSI: New York despite the fact that it bears no resemblance whatsoever to their reality. We have become so alienated from our specific place in the world that we no longer even notice that we have been colonized by urban values, urban rhythms, urban styles, urban stories. The gangsta rap music blasting from the car next to mine in downtown Marshall NC is likely to be owned by a farmer's son out on a Saturday night toot.

The natural outgrowth of this colonization is for the colonizer to see themselves as the pinnacle of quality, as the natural goal of all who labor in the arts. So nobody bats an eye when Rocco Landesman, visiting Peoria and seeing the aforementioned production of Rent, is noted as having observed "earlier in the day that amateur arts are worthwhile much in the same way that minor leagues and amateur sports have value in relation to the big leagues and professional sports." There is no recognition that local arts done by amateurs or pro-am artists might not give a tinker's damn about the self-identified "big leagues," that the local arts might be a vibrant end in themselves. And artists buy into this value system. Why? Because they are brainwashed with the ideas from a young age. More importantly, what should be commented on is not whether the Peoria production of Rent is "as good as" Steppenwolf ("I'm not going to let you trap me on that one," Landesman said transparently -- har har), but rather whether it makes any sense for Rent to be performed in Peoria at all.

When are areas outside of New York going to develop some pride, some sense of individual identity? When are they going to express themselves, instead of compulsively sneezing "Me too" after every artistic twitch on the East Coast? When is a visit to the theatre in different parts of the country going to be a unique experience, seasoned with local flavor and served with pride of place? When traveling, every tourist seeks an opportunity to experience the local cuisine, whether it is barbecue in Kansas City, gumbo in New Orleans, or kringle in Racine WI. But going to the theatre is like going to the mall -- once you're inside the doors, you could be anywhere.

University theatre programs need to stop teaching this generic approach, regional theatres need to reclaim their local roots, and artists need to wake up and reclaim their individuality.