Toward an "Organic Theatre" 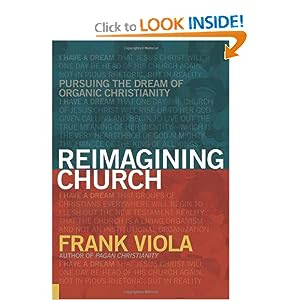 As many of you have probably recognized over the years, one of my favorite things to write about are analogues to the arts I have found, i.e., other fields that are exploring similar issues as those in the arts that can serve to illuminate our own situation. With that in mind, I have just begun reading a book entitled Reimagining Church: Pursuing the Dream of Organic Christianity by Frank Viola. I'm going to quote liberally from the introduction, assuming that you will see the parallels to the arts world, but I'll also make a few halting attempts to make the theatre connection clear.

After declaring a revolution both in theology and practice, Viola writes:


Countless Christians, including theologians, ministers, and scholars, are seeking new ways to renew and reform the church. Others have given up on the concept of church altogether. They have come to the conviction that the institutional church as we know it today is not only ineffective, but it's also without biblical merit. For this reason, they feel it would be a mistake to reform or renew the present church structure. Because the structure is the root problem. (emphasis mine)


those churches that operate primarily as institutions that exist above, beyond, and independent of the members that populate them. These churches are constructed on programs and rituals more than relationships. They are highly structured, typically building-centered organizations regulated by set-apart professionals ("ministers" and "clergy") who are aided by volunteers (laity). They require staff, building, salaries, and administration. In the institutional church, congregants watch a religious performance once or twice a week led principally by one person (the pastor or minister), and then they retreat home to live in their individual Christian lives.

Just in case the analogy isn't clear, speaking in terms of the theatre, the "institutional theatre" would be represented by the regional theatre system, organizations that are highly structured, building-centered, run by professionals who oversee a staff, a building, and give salaries and administer daily activities. The original regional theatres came into existence thanks to the Ford Foundation and the Rockefeller Foundation, and they were structured to look like Ford or Standard Oil -- institutional. Like the "institutional church," the theatre audience comes to the theatre occasionally to watch the professionals perform and then they return home. The "institutional theatre" is a system, a way of "doing theatre," and not the artists and staff who work within it. Neither Viola nor I see the people who populate an institutional church or theatre as somehow unworthy or bad. Most are committed, principled, and creative arts professionals who are passionately devoted to the art form. In addition, Viola writes, and I echo in terms of theatre, "By no means am I criticizing the church. In fact, I'm writing this volume because I love the church very much....Therefore, it's the present practices that I'm seeking to imagine, not the church itself." And he also says he is not saying that an "organic church" is the only right way.

In contrast, the "organic church" operates according to "the same spiritual principles as the church that we read about in our New Testament," the churches of the first century AD. It is "not a theater with a script; it's a gathered community that lives by divine life." An "organic church" as I understand it at this point (and as I said, I've just begun reading and the whole book is devoted to describing an "organic church" -- in fact, Viola wrote an entire book called Finding Organic Church) is small, non-hierarchical, and participatory. There are no specialists -- pastor and minsters -- who organize the service, but instead the service proceeds spontaneously. The meeting place is not a purpose-built building, but rather living rooms and other such places. Early Christians met in small groups in the homes of the congregants and were largely organized collectively, not hierarchically.

An "organic theatre" might follow a similar pathway. Instead of "professional artists" who create a "performance" that the "audience" comes to see in a theatre building, an "organic theatre" would be a small community of people who sometimes perform, sometimes listen -- a sort of ensemble who share their talents with each other in informal spaces. Passive consumption would be unacceptable -- each member would contribute in some way and in a variety of ways -- specialism would not fit. An "organic theatre" wouldn't create a "product" to be sold, but rather members would come together to share gifts, alternately giviing an receiving. There would be no need to spend money on marketing, because the ensemble is both audience and performer -- you would just let the members know about an upcoming event. If there was a desire, performances could be offered outside the group.

In many ways (but not all ways), this is how I conceive of a CRADLE arts organization. The ensemble would encompass as much of the community as possible, and everyone would be alternately audience and participant, giver and receiver, at different times. Events would take place all over the community -- in homes, in church basements, in courthouses, in libraries, in restaurants, in schools, in parks, wherever people might meet, the more creative the place the better. No tickets would be sold, although contributions might be voluntarily made to cover costs. Nobody would "make their living" this way, but together they might make a life, make a community.

This is very much outside the norm, of course, and sounds (even to me) a bit...woo-woo. And yet, I am attracted by the possibility of democratization of creativity, of removing the arts from the market economy and rooting them in the gift economy. I am attracted to the idea of "bringing the arts back home," both literally back into the homes of the community, but also into the hands of the community as well. A consumer culture such as ours relies on a concept of scarcity -- individuals are taught to see themselves as lacking in some regard, and encouraged to fill that lack through a purchase. In this case, we purchase stories about strangers which are told to us by strangers.

What if we proceeded from a concept of abundance? The assumption that we all have things we can share, and that the act of sharing them enriches both giver and gifted. That the value is found in generosity rather than virtuosity, connection rather than quality, circulation rather than specialization.

How might attitudes towards the arts be changed if this possibility were available? How might communities small and large be transformed? How might creativity be enhanced and spread far and wide?

I don't know. I am groping toward an alternative to the institutional system.
at January 25, 2012 2 comments: